Again, we are returning to you with the analysis of the prices of precious metals found in car catalysts. We are talking about platinum, palladium and families, which serve to purify the exhaust gases flowing through the exhaust system from poisonous substances harmful to our health. How were the graphs of global exchanges shaped this time? In the case of platinum, the overall balance is quite positive. On June 21, the price of an ounce was $ 809. At the end of the week, on Friday, it was worth more than USD 30 more and finally reached the level of USD 839.65. Despite the two moments of a slight drop, which took place on Tuesday and Thursday, the growing trend lasted for most of the week, which resulted in a large weekly difference in price. The average value of this element last week is 820 USD / ounce. 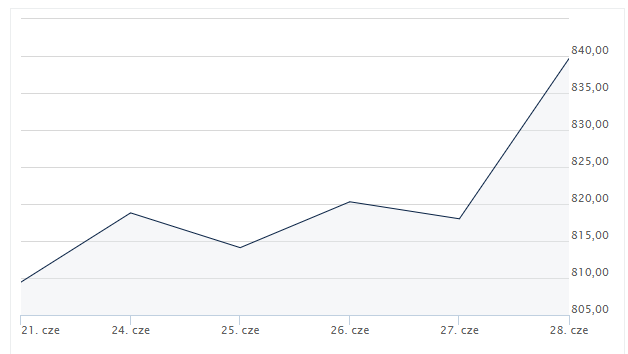 Platinum listing chart, source: bankier.pl Pallad has been growing in strength for some time. In recent days, its value has soared up, making this metal “just around the corner” from the historical value it achieved in March this year. The difference between the end-price and the beginning of the week is surprising. On Friday, June 21, the chart showed a value of $ 1 465 / ounce. After the weekend, it was already USD 1,528 / oz, which means a huge increase in quotations in such a short time. On Tuesday and Wednesday there was a drop of USD 15, but the end of the week caused that the metal recovered with losses. The maximum price, palladium, reached the end of the week, June 28, and it amounted to USD 1 558 / ounce. 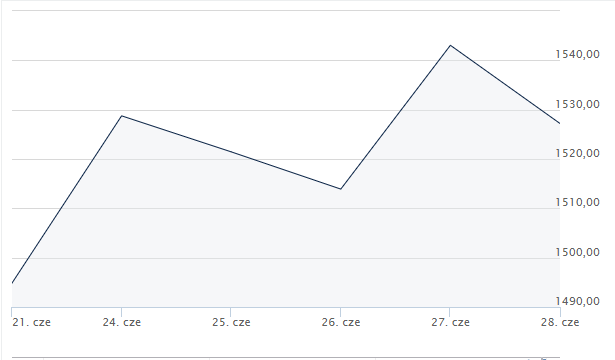 Palladium quotation chart, source: bankier.pl The family course has not been the most favorable recently. After recent drops in quotations, which began in mid-June, he finally began to increase its value. However, this positive return on the stock took place on June 26. During two days, rhodium increased its value to 3 150 USD / ounce. Certainly, it is worth mentioning the quotes of royal metal. Gold is undoubtedly enjoying a bull market on the market. In the end, he managed to break the difficult barrier of USD 1,380 / ounce. Such high gold prices, we could watch last time in September, 2013. Last week brought even more growth in the course. The initial price, June 21, was also minimal and amounted to USD 1 386 / ounce. Then, during the week, we were dealing with an increase, successively falling prices, and then a temporary stagnation. In the middle of the week, gold reached its weekly maximum, which amounted to USD 1 441 / ounce and became the record for the last 6 years. Be sure to visit our website to track further changes in this bullion. A little different, silver is the case. Here, the difference between the final price and the initial price is practically unnoticeable and amounts to 0.02 USD / ounce. Schematically, trends in the course can be described as increase-decrease-increase. The average exchange rate was USD 15.33 / ounce. We invite you to our tab, Weekly analysis of metal prices, where you will find periodic summaries of quotations, and to Exchange rates to be able to keep track of any changes on a regular basis. Price list of used catalysts, as always on our website.