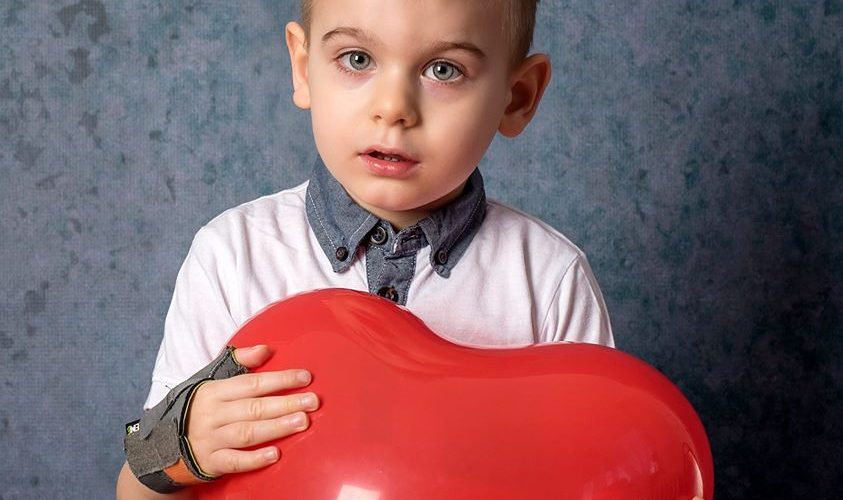 Do you remember Mikołaj?

We mentioned it in an article about the Charity Carnival Ball. One of the children, whose treatment was supported by the auction, is Mikołaj. Today we would like to introduce you to a little bit of the story of this little boy who has to deal with many adversities from birth. It’s about Mikołaj Banaszak, who in January finished just 4 years old, and behind him has a lot of unpleasant and painful experiences.

If you know his parents, you also know how much work and effort they put into the fight for the boy’s fitness. But from the beginning. Mikołajek was born on January 16, 2015. The childbirth took place in the 36th week of pregnancy. Majki was 49 cm and weighed less than 2.5 kg. He received 10 points on the Apgar scale from doctors, despite the low birth weight and the fact that he was wrapped in umbilical cord. Doctors were aware of the features of hypotrophy, a developmental defect associated with growth retardation, and peripheral and peripheral tremor of the limbs. Despite this, he did not have a head ultrasound, which would help determine where the problem lies and would allow you to start working immediately.

The next 8 months are fruitless visits to the neurologist who did not give an unambiguous answer to what is wrong with him. After numerous tests and visits to doctors, they finally got an answer. Mikołajek suffered a stroke during the 32nd week of pregnancy. Then he was diagnosed with cerebral palsy with spastic right-sided paralysis. Diagnosis was a total shock for the family, which, despite such horrible information, immediately acted to find out as much as possible about the damage caused by the stroke and start rehabilitation.

The boy is under a multidisciplinary care: neurologist (due to basic disease and epilepsy), cardiologist (due to congenital heart disease), ophthalmologist (eye defect and paralysis), gastroenterologist, ENT (hearing impaired), dermatologist, allergologist, neurologist, psychologist and tyflopedagogue and many physiotherapists.

Thanks to constant rehabilitation and the enormous involvement of his parents and Mikołaj himself, he slowly learns to walk and talk. He also works on the right hand that has been paralyzed. There is still a lot of work ahead of him.

The process of improvement will, in fact, last a lifetime. It will not end after one or many rehabilitation stays, although participation in them is extremely important for improving his health.

Doctors believe that his prognosis is great. Although his brain has suffered considerable damage, he succeeds in joint efforts to achieve success. Intense struggle for health is most needed now, in the first years of life, which determine mental development. The brain develops the fastest, so it’s the right time to take all possible actions to improve its situation.

Together with Majki’s parents, we kindly ask for support in treating the boy, which is expensive. Extensive rehabilitation periods are needed in Olinek, where the boy can count on the high quality of therapeutic methods. Unfortunately, these are highly expensive stays, but effective.

To get the right results of the therapy and to achieve success on the way to health, about 3-4 stays a year are needed, combined with permanent rehabilitation classes. The cost of one 2-week stay is as much as 6,000 zlotys!

Majki is a beneficiary of the “Młodzi – Młodym” Student Foundation in Częstochowa.

His fate can also be tracked on his official facebook.

You can transfer your Mayan one to 1% by settling PIT and entering in the field KRS: 0000270261 with the specific goal: Mikołaj Banaszak 6791

Together, let’s give Mikołaj a chance for normal and independent functioning!

Fundraising for a training camp for the MTS Chrzanów team