We invite you to a cyclical summary of the prices of precious metals – platinum, palladium and rhodium in the week of 28/06/2019 – 05/07/2019. Is this time also good news for quotations of metals that interest us, filling car catalysts? Last time, we wrote about the trend that lasted for most of the week, which resulted in a platinum increase of 30 USD / oz. Have we had reason to be happy this week? The overall balance is quite successful, although of course it was not without moments of collapse. Between the final price and the initial price is only USD 2.9 difference per ounce, so we have no reason to be happy, unless we are satisfied with the fact that there are no falls. Within those few days described, we had to deal with a fairly strong decline, which was, however, compensated in the second half of the week. The average rate at this time was $ 839 / ounce, so it is $ 18 more than the reference rate of June 27. The change was 3%. As we mentioned during the last analysis, palladium is growing in strength, which meant that it began to approach the records from March this year quite closely. Also in the last few days we have been positively surprised by the turn of the case. From $ 1,513 / oz, this metal increased its value to $ 1,567 / oz ($ 54) in just 3 business days, which is not the standard in recent weeks. Even a slight price reduction at the end did not disturb the good situation in which everyone interested in the price of this element found themselves. It is worth mentioning here that only 9 USD divides us with a record-high ounce of palladium, which we could observe in the charts on March 21. Will we finally get the “breakthrough” of this value? We have a fervent hope that it will. 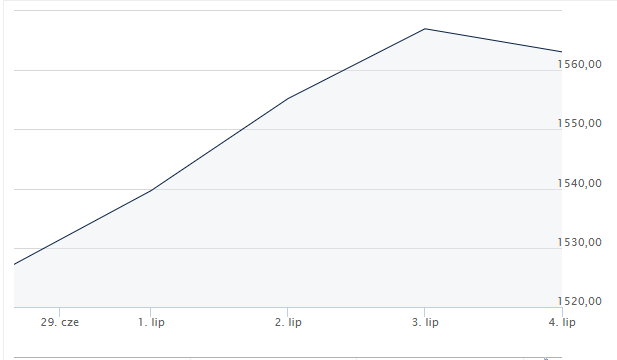 Palladium quotation chart, source: bankier.pl In the case of rhodium, the situation seems relatively stable. Throughout the period from June 28 to July 5, the exchange rate was USD 3,150 / ounce and exceptionally did not undergo any changes. Gold also without spectacular changes. The biggest fluctuations took place at the beginning of the week. On Friday, June 28, an ounce cost $ 1,412. Immediately after the weekend, it fell to the minimum price of USD 1,385, after which it started to gain in value. First, rapidly, up to 1 421.50 USD / oz (jump by 36 USD), then with slightly lower dynamics, until Wednesday when gold cost the most – 1 438.85 USD / oz. The average exchange rate was USD 1 412 / ounce. It is worth mentioning that the NBP announced considerable purchases of this metal. These activities started already last year, and led to an increase in our foreign exchange reserves by 125 tons, increasing their total number to 228.6 tons. The NBP also informed that half of the reserve will be brought into our country and will be kept in their vault. A similar decision regarding the import of gold to the country was also made by Germany, Austria, Hungary or the Netherlands. Recall here that until now, the gold of our country is kept in England. It also turns out that in June alone, 95 tons of this precious metal were purchased! This is really an unusual news with which we wanted to share with you. 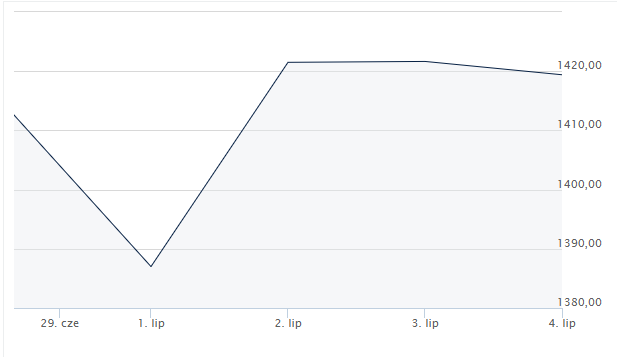 Gold quotation chart, source: bankier.pl The silver quotation chart is very similar to gold. Here, too, the greatest dynamics of change takes place at the beginning of the week, when the metal lost its value from 15.5 USD / ounce to 15.18 USD / ounce, and then on Tuesday returned to its previous price. The next days did not cause major changes in the course. You can follow the current precious metals listings in our Stock Exchange rates tab. We also invite you to observe the price list of more than 8 200 models of used catalysts. Fresh prices every day!