Recently, a lot has happened on the precious metals market, especially when it comes to platinum and palladium. This second metal again set a new price record of $ 1,599 / oz, while meeting the expectations of all concerned. In the case of platinum and family, we could also talk about a good period on the stock market. Their price has clearly increased. How was this week? Do we have reasons to be happy this time? Let’s look at platinum courses first. In the last few days, we have not really had to worry about the price of this noble element. With the exception of two days – Tuesday and Friday, the whole week we recorded an increase, which resulted in a change from 834.55 USD / oz to 849.45 USD / oz, and a maximum price of 865 USD / oz at the end of the week. This is the highest value that the element has been able to achieve for a month. The average platinum value last week was 846.52 USD / ounce. That’s 16 USD more than the average of the last 30 days. It is quite different in the case of palladium. Here, practically before the entire period, except for two days – Monday and Wednesday – there was a drastic drop in value. On July 11, we were happy with the record price of USD 1,599 / ounce. Already four days later, on Monday, an ounce of palladium cost $ 1,562 USD, and with successive days, this value was decreasing. The biggest drop in the rate took place from Monday to Tuesday. Then palladium fell to the value of 1 524 USD / ounce. Despite the temporary, Wednesday growth, the price at the end of the week was just $ 1,495 / oz, or over $ 100 less than the historical day, July 11! 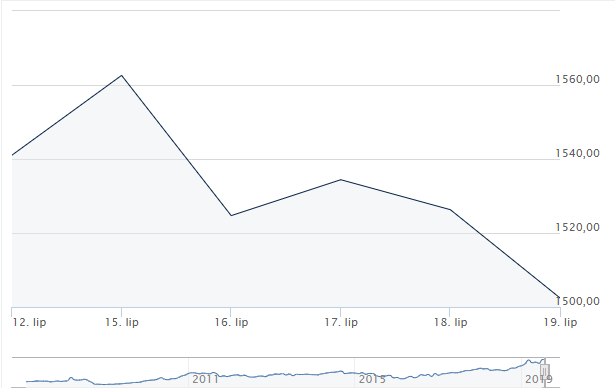 The situation of the family seems to be much more stable. Before the vast majority of the week, the rate fluctuated around the value of 3,300 USD / ounce. Only from 16 to 17 July, the rate slightly decreased to 3,270 USD / ounce, however, it is not such a big difference to start worrying about it seriously.

When it comes to gold prices, we can talk about the next record. On Thursday, this metal has reached its highest value for 6 years, amounting to 1 447,05 USD / ounce. Whereas on July 19, gold reached the value of USD 1 452.95 / ounce. This is the highest course since May 2013! Experts indicate that the main reason for the jump was the weakening of the dollar’s position. The gold rate is, as we have already mentioned, negatively correlated with the exchange rate of the American currency. With the drop in its price, gold quotes go up. The average value of bullion last week was 1 423 USD / ounce. 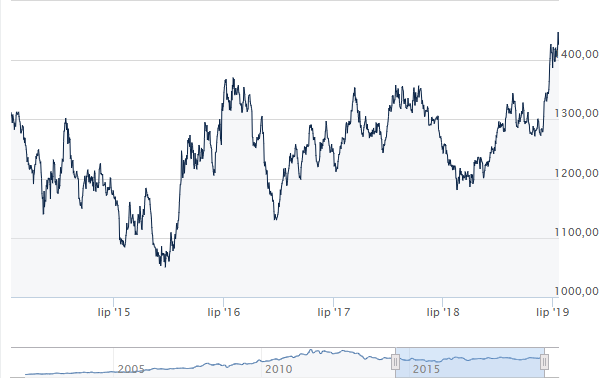 Chart of gold quotes from the last 5 years, source: bankier.pl Also, the silver rate throughout the whole period was rising. The maximum value reached by silver is 16.62 USD / ounce on July 19 this year. The EUR / PLN exchange rate was quite strong, from 4.2692 to 4.2495. The USD / PLN exchange rate, despite considerable fluctuations during the week, did not bring any major changes at the end, if we compare the initial (3,7879) and final (3,7876). You can see the current precious metal rates in our „exchange rates” tab. The site also always has a current list of catalysts.